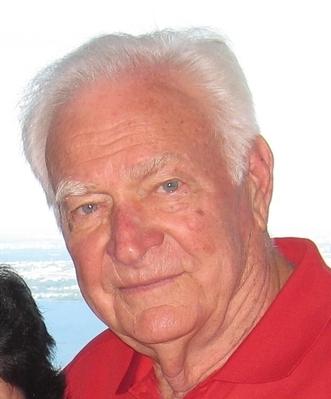 I was 7-years-old when my mom married Bob. This meant that my sister and I moved into that big white house at the top of the hill in Purchase, NY. Bob already had four kids, so with the addition of us, there were now six kids living in the house. We became our own Brady Bunch. But we had more bedrooms than the Bradies. The older kids had already reached their cool Greg Brady stage and had their own rooms.

Today this would be called a blended family. But we were welcomed in and we were just a family. And many years have passed since the six kids have been together, Bob made it happen again today.

Bob was a typical suburban dad. He left early in the morning to commute to New York City and was home by dinner. It was the 1970s and there was lots of entertaining in the evening and on weekends. While my mom planned the menus, and made the food, Bob literally made menus for our parties where he used his creative spark and named dishes after the guests. And when it was summertime, these gatherings moved outside to the pool deck. I remember swimming in our lighted pool long after dark, while the adults sat and talked after the meal. Bob ruled those parties with his presence. His voice and his laugh could be heard over the kids splashing in the pool.

Life has a way of taking twists and turns, I found myself back with my mom and Bob during high school. This was after they had moved to Florida. And that Brady sense of one family that existed with six kids still existed when I was the only child at home. And how cool was it to be the only high school kid whose parents owned a rock radio station. Thank goodness the disco format had long since fallen by the wayside.

When my son Peter was a toddler, and just beginning to talk, we visited Grammie and Grandpa Bob at Thanksgiving, as had already become a tradition. Peter said no more than about four or five words, but each of them meant many things. Baba was his word for Grandpa Bob. One night at dinner, instead of passing Peter his chocolate cake, Bob said he was going to eat it himself. “No, Baba, tate,” said Peter. That translated to “Please Grandpa Bob, don’t eat my chocolate cake.”

My kids and I spent the week with my mom and Bob less than a month ago. We ate lots of good food, because even in his advanced stage of Alzheimer’s, some part of him still enjoyed good food. We didn’t realize it at the time, but we were lucky to have had that time with him.

And last week, during one of his good days during his brief stay at the nursing home, he played the “I’m going on a trip” game with my mom. That’s the game where one person starts with A and they name something to bring that starts with A, and then the next person does B. Normally, you have to remember what the other person brought, but they did not play that way. They just had to say the thing that started with the next letter. Bob didn’t always name something with the right letter, but he was trying. And then he got to the letter J. He was struggling a little bit. My mom tried to prompt him by showing him juice and saying the word. Suddenly he said he was bringing Jeff. You mean my son, asked my mom. Yes, said Bob.

That would have been a great trip and I wish I had the chance to take it.