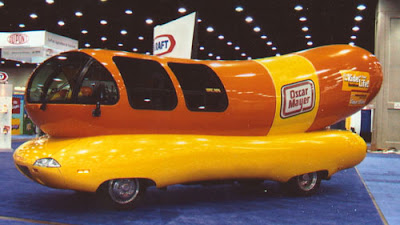 In honor of National Hot Dog Month, here is a recent story (6/29/07) about the Oscar Mayer Weinermobile:

That’s what an Arizona Highway Patrol officer was wondering when he spotted the iconic Wienermobile rumbling along with plates that came back as stolen.

The Wienermobile was on the road for a promotion in which contestants sing the Oscar Mayer jingle for a shot at appearing in a commercial and winning “American Idol” tickets.

The 27-foot-long, 11-foot-tall hot dog on wheels was in a construction zone on Interstate 10 in downtown Tucson Wednesday morning, slowing traffic. Officer Korey Lankow caught up to it and ran its YUMMY license plate to make sure it was street legal.

YUMMY came back as stolen.

Lankow pulled over the Wienermobile, and two more officers arrived to help.

It turns out someone had indeed stolen the YUMMY plate off the Wienermobile in Columbia, Mo., back in February.

But the plate still came back as stolen Wednesday, with no note that it was OK if found on Wienermobile itself.

A message left with the Columbia Police Department wasn’t returned.

Jeff Kendell, 23, of Salt Lake City, was a passenger – or “hot dogger” in Oscar Mayer lingo – in the rolling wiener.

“We knew we weren’t doing anything wrong,” Kendell said. “We figured they were just pulling us over to check something.”

Not missing a beat, Kendell handed out wiener whistles to the officers, who took a peek inside the Wienermobile and snapped pictures with digital cameras.

Arizona Highway Patrol spokesman Quent Mehr said Lankow is hearing plenty about it from his buddies.

“The officer, he’s just like, ‘I don’t believe this is happening,”‘ Mehr said.