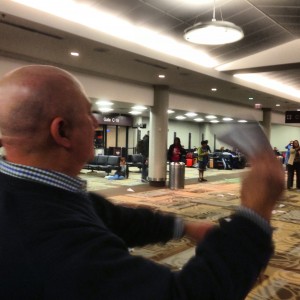 Southwest proved last night that they are socially-connected to customers. while flying home from Austin, Texas, I had a layover in Nashville. Between email alerts and voice mail messages I already knew my flight was going to be delayed over an hour and a half in Nashville. After a long week of travel, I was not excited that my plane would land at my home airport after 1:00 am. But I was prepared for the long layover.

I assumed that most other passengers were also prepared for the layover, but no one likes lingering in airports longer than they have to. The crew at Southwest Airlines wanted make the experience more fun for all of us by arranging a paper airplane contest. When was the last time you made a paper airplane? And you never had the chance to fly it in a real airport. To increase participation, the Southwest crew offered $50 travel vouchers to the five people whose planes flew the farthest. That’s $250 in travel vouchers just to make people smile while waiting for their plane. 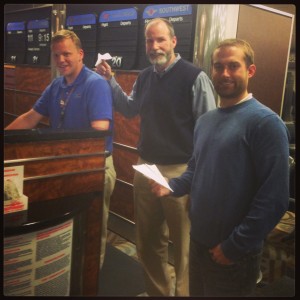 Fifty people, waiting for two delayed planes, folded their sheet of paper into planes of various designs and prepared for their moment of glory. The Southwest crew told us this was the largest paper airplane contest they have ever had. It was a great diversion, as it takes some time for 50 people to launch a plane down the terminal one by one. The most thrilling moment was when the strongest entry, it was flying fast and true, hit the ceiling and dropped down. It still was among the top five planes. Not only did these five get vouchers, but the kid who crumbled her plane into a ball and rolled it down the carpet got a $25 voucher for her creativity. And for fun.

This first contest was all about distance, but the second was about accuracy. The Southwest crew put a trash can in the middle of the 50 participants and we all started aiming at the can. The first five to get their plane in would get $50 travel vouchers. And the friendly chaos began. This contest really woke up the travel-weary passengers. We were trying to win something, but we were having fun. Again, this took some time before we had five winners, and like in the previous contest, they changed the rules and awarded vouchers to six people.

This was a simple activity that showed that Southwest cared about their customers and helped pass the time. And clearly they had done it before. It required very little preparation or cost, but was a huge success in connecting people to the Southwest brand.

Marketing Takeaways:
1. Empower your employees make decisions for the good of customers.
2. Encourage your customers to have fun, especially in an environment or situation where they are not having fun.
3. Positive experiences lead to positive word-of-mouth, both on social media channels and in person.